5 Reasons You Should Start Drinking Broth

The trend has caught on and it’s now offered in many places around the country including various commercialized boxed versions you’ll find in health food stores. Now considering our ancestors didn’t walk around drinking cups of broth you might wonder if this is just another overhyped ridiculous hipster food trend.

Well, I don’t think so. Our ancestors didn’t walk around drinking mega-sized flavored coffee drinks or kale smoothies and let’s face it, those trends are going away anytime soon. Times change and I think there are some compelling cultural reasons why drinking bone broth may be around for a while.

1. Great for your gut

Chances are they didn’t have any of the increasingly common gastrointestinal disorders that now plague tens of millions of Americans. According to the National Institute of Health, approximately 1 in 5 Americans now has some form of digestive disease.

What is going on?!

It would be foolish not to believe that the parallel rise of chronic disease and the industrialization of our food supply are not highly connected. Our ancestors would not recognize 90% of the  “food” in supermarkets as food. Highly processed, loaded with pesticides, preservatives, GMOs, sugar and unpronounceable ingredients, they can wreak havoc with our gut lining.

More and more people are waking up to the problems with industrialized food and seeking answers to their health problems in better quality food. Considering millions are walking around with chronic gut issues, drinking bone broth in to-go cups is not such a crazy idea as it might seem on the surface.

A properly made bone broth is loaded with gut-healing nutrients that can help ease intestinal inflammation and repair a damaged gut lining.

2. More nourishing and sustaining than coffee.

As opposed to bone broth, coffee can actually withdraw nutrients from the body. This is due to the effect of caffeine, which is a diuretic and can cause the loss of vitamins and minerals as the body purges the caffeine.  But caffeine also acts very much like sugar in the body, causing a temporary rise in blood glucose while stimulating our adrenal glands to release energy-boosting hormones and our central nervous system to release feel-good neurotransmitters, all of which give us a concurrent rush of energy and a mental lift.

While the effects are nice, they are temporary and can lead to the opposite effect, which leaves us feeling lethargic and cranky.  This usually ignites a craving for that second cup of coffee somewhere mid-morning or perhaps mid-afternoon. For many people, this can lead to a dependence on caffeine and a nasty habit where we start consuming more than a moderate cup or two of coffee per day.  Over the long-term this can lead to further issues with poor sleep, restlessness, irritability, sugar cravings, hypertension and hormonal imbalances. (source)

To belabor the point, coffee is acidic and can exacerbate GI issues such as heartburn, GERD, and gastritis. A study in 2014 even showed that caffeine can inhibit collagen production in the skin.  A properly made bone broth will often be rich in… collagen.

Try replacing that morning cup of coffee with bone broth instead. Trust me, I know it sounds kind of strange. But it’s so much healthier and can be a very helpful way to wean off or even entirely eliminate a serious caffeine dependence.

3. Great for a good night’s sleep

So many of my clients tell me that sugar and junk food cravings peak at night, especially after dinner.  When that urge hits, try warming up a cup of broth first. The mineral content of bone broth, especially calcium and magnesium, helps to calm and relax our muscles. They also play important roles in regulating our sleep cycles.  The same goes for the amino acids in bone broth. A study by Japanese researchers found that glycine, one of the most abundant amino acids in bone broth, promotes alertness during the day and a restful night’s sleep.

If you have issues with insomnia, reducing caffeine and drinking bone broth can be a powerful 1-2 punch in resetting your body’s natural cortisol rhythms.  Basically, that means helping you relax and de-stress.

In my own life, I can attest to how much better I feel when I have either a good soup made with a homemade bone broth for dinner or a cup of broth after dinner.  The urge to snack is reduced and I feel so much calmer at night and sleep so much better.

Make a huge pot on the weekend that will last you all week and then transfer it to the fridge.  Simply warm up a cup or two in the morning, season it to taste, put it in a travel coffee mug that will keep it hot, and you’re good to go. Takes as much time, if not less, as brewing a pot of coffee or even a cup of tea.

5. Great way to sample the essential flavors of ethnic cuisines. For example, Thailand!

Because bone broth is such a welcoming medium, equally incorporating and diffusing whatever you add, it’s a great way to taste and become familiar with the essential spices and herbs of different ethnic cuisines.

Thai food is a perfect example. Many common Thai dishes use quite a variety of herbs and spices that may be hard to individually identify.  By using only a few in drinking broths you’ll become more familiar with their unique flavors.

How to Make a Thai-Style Drinking Broth

In my new book, The Thai Soup Secret, I include 5 simple recipes for drinking bone broth using a variety of Thai ingredients.

The drinking broth recipe below is pretty much the base of a tom yum soup but without the veggies, chiles, and protein. So simple and yet so incredibly delicious.

How to Make a Gelatin-Rich Bone Broth in 30 Minutes 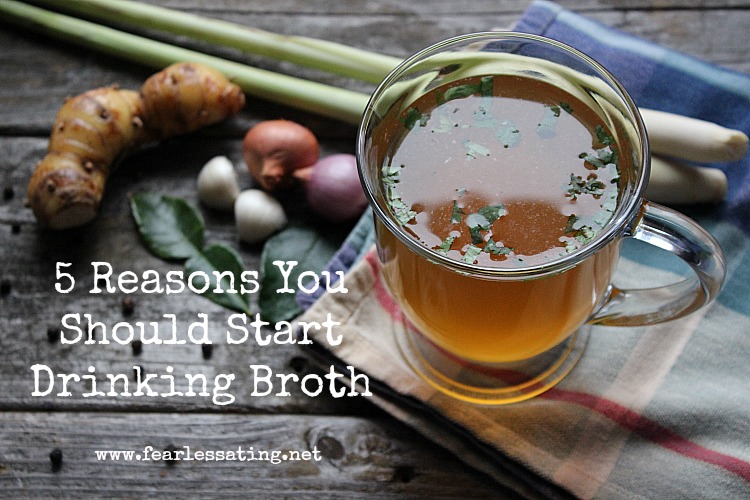 A simple infusion of bones and Thai herbs and seasonings in broth.